Consulate General of Spain in NY

- October 26, 2018
I have for the last year given several interviews to regional, national and international press, in English, Spanish and French - you can check them in the depository here. I am not one to make a huge fuss out of it / them; however, the Consulate General of Spain in New York just published an interview they did to me a week ago (on their website in Spanish, here), and I am especially proud of this one, so I have translated it into English and left it here for the non-Spanish-speakers. Enjoy!
--

Interview: Diego López, the Spanish record swimmer who works in finance in New York (10/26/2018)
Diego López already holds several records and exploits as a swimmer. But before the end of 2018 he also wants to become the first Spaniard to swim in Antarctica and the first in the world to do so on all continents in the same year, which would entail a new World Record. He resides in New York, where he works in the financial sector.

In the last year, Diego López (Las Palmas de Gran Canaria, 1981) has completed the Triple Crown of Open Water Swimming (Swim Around Manhattan, English Channel, Catalina Channel) and become the US National Champion of Winter Swimming. He is currently preparing to swim in Antarctica during the month of November, which he balances with his career as an independent financial consultant in New York, where he has kindly assisted us for this interview.

How did your love for swimming begin?
I learned how to swim when I was 3 years old, in Las Palmas de Gran Canaria, and when I was eight years old I entered into the local swimming club. As a child, I sweated a lot doing other sports, so my mother thought that swimming was what I would like the most. She was not wrong.

At what point do you jump into the big competitions and get your first big achievement?
As a pool swimmer, I never excelled too much, although I took part in the National Championships of Spain (Juniors), of England (College) and of USA (Masters). As an open water swimmer, I started to stand out in 2012, in Hong Kong.

You swim in open water and you have done it in unique places all over the world. Any journey that you have special memories of?
I have participated in competitions in more than 20 countries, and each one has been special. But I remember with great affection the Swim Around Manhattan (48km), which I did last summer, for living here and for having pushed me to aim at bigger goals. Also, I was lucky to achieve a great time, winning the race and establishing the best Spanish time to date.

LIFE IN NEW YORK AND WORK IN FINANCE
Since when do you live in New York? How is the experience in this city?
I moved to New York in the summer of 2016, from Abu Dhabi. I have lived in many places, but New York has something special: it is the most global and cosmopolitan city I know and I love getting lost around its corners and getting to know its latest restaurants and rooftops.

Professionally, you are a financial entrepreneur. How is your day? Is it a very competitive and demanding sector?
I worked for 12 years as a financial consultant for large international firms. In July of this year I decided to become independent and I incorporated my own firm in New York. I was lucky that my first client was the World Bank, and I spend most of the day working for them, normally remotely, although sometimes I have to go to Washington DC. It is a highly competitive market, only the best get to the top and you are always expected to give it all.

How do you combine work with training and competitions?
I wake up every weekday at 5.30am, whether it rains, it snows or it hurts, to train in the pool with a "Master" team. These are two intense hours, but they allow me to dedicate the rest of the day to my professional activity. On the weekends I go for a run and I race wherever it is, or I go to the beach in Brighton Beach, Brooklyn, to swim longer. Since I am also preparing "Ice Swimming", I go to the beach all year round, where the sea reaches a degree centigrade here.

Many Spaniards run the New York marathon but few have done it by swimming. In August of 2017 you participated in the well-known Manhattan Island Marathon Swim (47 kilometers). How was it? Is there anything that makes it distinctive being in New York?
Indeed, I was the eleventh Spaniard to make it in history. The waters of the Hudson, East and Harlem rivers are better than people think, and it is an amazing competition given the variety of the landscape. Swimming next to the Statue of Liberty, or under the George Washington and Brooklyn Bridges among others, is within the reach of very few!

THE CHALLENGE OF SWIMMING IN THE SEVEN CONTINENTS IN THE SAME YEAR
This 2018 is being special because you are pursuing a challenge: to be the first person in history to swim in the Seven Continents in a single year, establishing a new World Record. How is it being? What races have you completed already?
Since I came up with the project, I knew it was going to be a very ambitious challenge and it was going to demand a lot from me, but I am enjoying every one of the swims and experiences. I started with Oceania’s longest swim in Perth, I continued with "the escape" from Robben Island prison in Cape Town, I swam in the world’s highest lake in Bolivia, I successfully completed the English and Catalina Channels during the summer, and I won the Clean Half of Hong Kong a few weeks ago. After these six continents (and some more preparation races along the way), I am just missing 1km in Antarctica in November, always without neoprene or external help.

To complete the record you need to swim in Antarctica. It will be in November, competing in the 1,000 meters among the world’s top 15 ice swimmers. You will then become the first Spanish to do so. Tell us more about this adventure ...
To date only 10 people have swum at least one kilometer in the waters of Antarctica, and none of them is Spanish. Ours is the first expedition of this type to be held, organized by the IISA (International Ice Swimming Association), and I will be competing with 14 other seasoned swimmers, including World and Olympic champions. I am facing it with all the respect that should be given to this sport, and with the eagerness to continue learning. It is the most difficult and dangerous crossing of the year, without a doubt. Swimming for 20 minutes in zero degrees water means exposing the body to a hostile environment, which is very risky. The rules only allow traditional swimsuit ("speedo"), hat and glasses. I prepare myself with cold showers, icy baths and long swimming in cold lakes.

What is the best way to follow your career, efforts and achievements in the competitions in which you participate, apart from the news that may appear in the media?
You can follow me on my website, http://www.globalswimmer.com/, as well as on all social networks, always with the name of @globalswimmer, which is my nickname.

You are also the President of the Spanish Ice Swimming Association. You intend to take this sport to the Winter Olympics in Beijing 2022. At what point is the proposal?
The International Olympic Committee has been receptive to date, but they want to avoid the "jackass" effect, i.e. swimmers not taking appropriate measures and pushing beyond their limits if you make the sport Olympic. It is a negotiation that takes time, and we want to make a final push during the next World Cup in Russia in March 2019, where we hope to convince them to make it at least an exhibition sport in Beijing 2022.

As a Spaniard living abroad, for years now, do you have the opportunity to interact with those who are also residing outside of Spain? Do you participate in events with the Spanish community in New York?
Of course, I have always kept in touch with the Spanish community, in Milan, London, Qatar, Abu Dhabi, Hong Kong, Rio de Janeiro and now New York. I have attended several professional events organized by the Consulate and by the Chamber of Commerce, and I recently participated in a panel discussion at the NY Summit, the most relevant event of Spanish-speaking executives and leaders in the USA, along with other names such as López Alegría and Juan Verde. 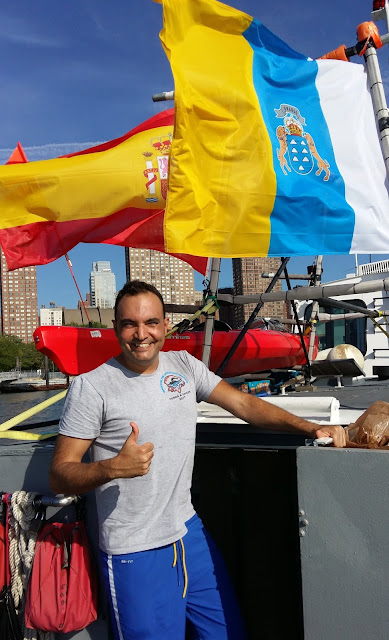