Let's go back into the ICE

- February 17, 2019
It is again that time of the year when the winter Gods have been blowing and spitting hard, and the water in the Northern Hemisphere is enough cold for nobody to even think about touching it with the toe. Except for the superhuman ice swimmers out there.

I’ve had a bit of a break since I finished the Ice KM in Antarctica last November. I can’t believe it’s actually been three months without a single race or big swim, either marathon or ice swimming. But it’s now over, as I prepare for my next big goal: the 3rd Ice Swimming World Championship in Murmansk, Russia, next March 14-17.


I will again be building up, using the Memphremagog Winter Festival in Vermont to get back to the ICE. With the absence of the USWSA Championships this year, this weekend has become extremely popular in the Northeast, and there will be c.90 mad swimmers from all over America and more. It is very similar to Murmansk in the sense that it is a pool cut / dug out from a frozen lake, and there could be gusting winds and extreme weather outside the pool. Also, I have never swum in a frozen pool before so Vermont will be the perfect practice for Murmansk. The only difference is that the former is more relaxed (safer?) than the latter, with 200 meters as the maximum distance.

In between both events, my intention is to complete my Ice Mile. The mile is the maximum distance swum in Ice Swimming, only done by 300 people in history. Becoming the first Spaniard to do it would be a great accomplishment. March is a great month to do it in Boston or New York City, as the water temperatures are still under 41F / 5C, so I hope I can find a way to pursue it. 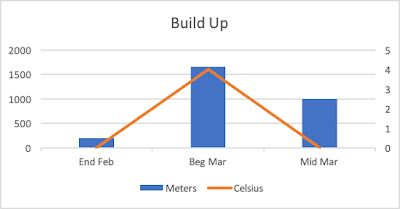 But the ice on the cake (no pun intended) will be the IISA World Champs. There have only been two of these before, one in Murmansk itself in 2015, and one in Germany in 2017. Ice Swimming is the national sport in Russia (incl. its President!), and the Ice KM has now grown into a 113 participants event, so it is hard to keep the excitement. I can’t wait to meet again the friends I swam in the Antarctic Circle with, and race with them in the Arctic Circle. We will actually be two Spanish swimmers this year (yay!) and waving our flag will be a great honor. I will also be taking part in the 50 and the 500 Free, hoping to place well in both the age group and the general ranking.

Ice Swimming is becoming increasingly popular – I still get those looks when I tell people what I do (like?) but it is now more known all around the world. It is getting professional, and not only practiced by older, slower people, but also by some really fast youngsters. The WRs recently broken by Sven Elfferich from Netherlands (17) and Alisa Fatum from Germany (23) in the Ice KM is good proof. As a result of this popularity and the tremendous efforts by the IISA, the International Olympic Committee will be in Murmansk, assessing the merits of the sport to be included in the Winter Olympics programme in Beijing 2022, so fingers crossed!