- April 17, 2019
What do you do after finishing a huge project? You think about your next one and make it even bigger.

Since completing the Continents Seven, and more recently, the Ice Swimming World Championship, I've been mulling about a new project that would build on the achievements so far, and yet, would be something nobody has done and recognized as one of, if not the most difficult challenge in the open waters ever. I could not come with anything that would fit better than the OCEANS GRAND SLAM.

According to WOWSA, "the Oceans GS is an Open Water Swimming solo challenge to complete the Oceans Seven (i.e. the 7 most challenging channels around the world), in addition to completing a 1 km swim anywhere within the Arctic Circle and the Antarctic Circle in the Southern Ocean. The Oceans GS is OWS' equivalent of Mountaineering's Explorers Grand Slam". To put in perspective:

Unlike the Continents Seven, this challenge is not time-constrained but I aim at completing it within the next year and a half / two years. I am done with 4 of the 9 swims (English Channel, Catalina Channel, Arctic, Antarctic), and my next one will be the Strait of Gibraltar - a double crossing if weather permits.

As usual, my motivation goes beyond the personal challenge and "the fame". I have partnered again with Ocean Recovery Alliance, and will be fundraising in a significant effort to improve the state of health of our Ocean. The link for the fundraising is here. We will be doing talks in the US, Hong Kong and around the world and will be hopefully partnering with some corporates along the way.

If you'd like to be part of the adventure and of the solution - reach out to diego@oceanrecov.org. 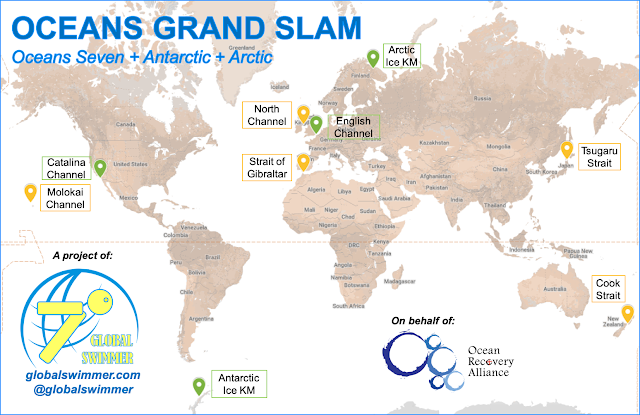